Chrome
Home
/
Blog
/
Intriguing Etiquette From Around The World

Intriguing Etiquette From Around The World

Etiquette and manners can differ vastly depending on where you are in the world, meaning that something which is perfectly normal in one culture is not accepted in another. For example, one the western world’s most common etiquette rules surrounds tipping, yet in China and Japan this is not recognised and offer a gratuity can even be insulting to some people.

When travelling, it’s important to be aware of these customs so as to not inadvertently offend someone or seem rude. Here are some world etiquette rules that you may not be aware of.

When it comes to food, there are many things that could get you into trouble in certain parts of the globe. In fact, in a lot cases, behaviour at the table is totally mirrored when talking about eastern and western cultures. Some examples include belching and slurping being compliments to the chef in the Far East and emptying your plate entirely being a sign that your host hasn’t provided enough for you to eat. You may also be frowned upon if you pour your own drink in Korea (pour for someone else and they will reciprocate), leave your chopsticks vertically in a bowl in Japan (lie them across or next to it instead), ask for salt and pepper in Portugal (this can offend the chef) or eat from your fork in Thailand (use it to push food onto your knife or a spoon).

Many of the ways you would usually great a friend or business associate in the UK could land you in hot water whilst on holiday. Want to say ‘hi’ with a nice friendly wave in Greece? It might be better to do so with the palm facing towards you so it doesn’t get misconstrued as a very offensive Mountza gesture. Looking to make friends with a warming smile in Korea? Strangers will think you are insulting their intelligence. And if you want to make a good impression in the Philippines, it’s best not to use that firm handshake you’ve been perfecting otherwise you’ll come across as very aggressive.

It can be difficult to know where to put your arms when you are talking to someone in Finland as folding them in front of your chest is a sign of arrogance and putting them in your pockets is considered rude. It can also be very confusing when trying to say ‘no’ in countries such as Greece and India. A short sharp nod of the head will do the trick if you find yourself in Athens, whilst a gesture similar to a wave can mean ‘no’ or ‘go away’ in Delhi.

Making social plans in South America can be very difficult as there is a custom to arrive late for these kinds of events. People in Argentina and Brazil regularly arrive about 30 minutes to an hour late for occasions such as a meal at someone’s house or a party. Speaking of parties, if you offer a gift to your host in China or Japan, don’t be surprised if they refuse it the first time. This is a demonstration of their restraint and you should offer again later. Finally, if you ever find yourself in a Chinese kitchen, don’t ever flip a fish in the pan. This is thought to bring bad luck as it symbolises the fisherman’s boat capsizing.

Now that you are aware of the finer etiquette points around the world, you are ready to travel worry-free. So where will your next adventure take you? Contact us today to plan the trip-of-a-lifetime.

6 Foods To Eat On The Go In Rome

In a busy city like Rome, home to many fantastic tourist sights, sometimes you don’t have time to sit down and enjoy a meal in a restaurant. Luckily, Rome has plenty of bite-sized morsels to keep you going.
5 Ways To Discover Local Food On Holiday

Whether you like fine dining, street eats or something in between, here are some great ways to discover amazing food experiences whilst abroad.
10 World Cities That Have Given Us Delicious Foods

These ten foods are proudly named after a city, but how strong are their ties to these different regions? 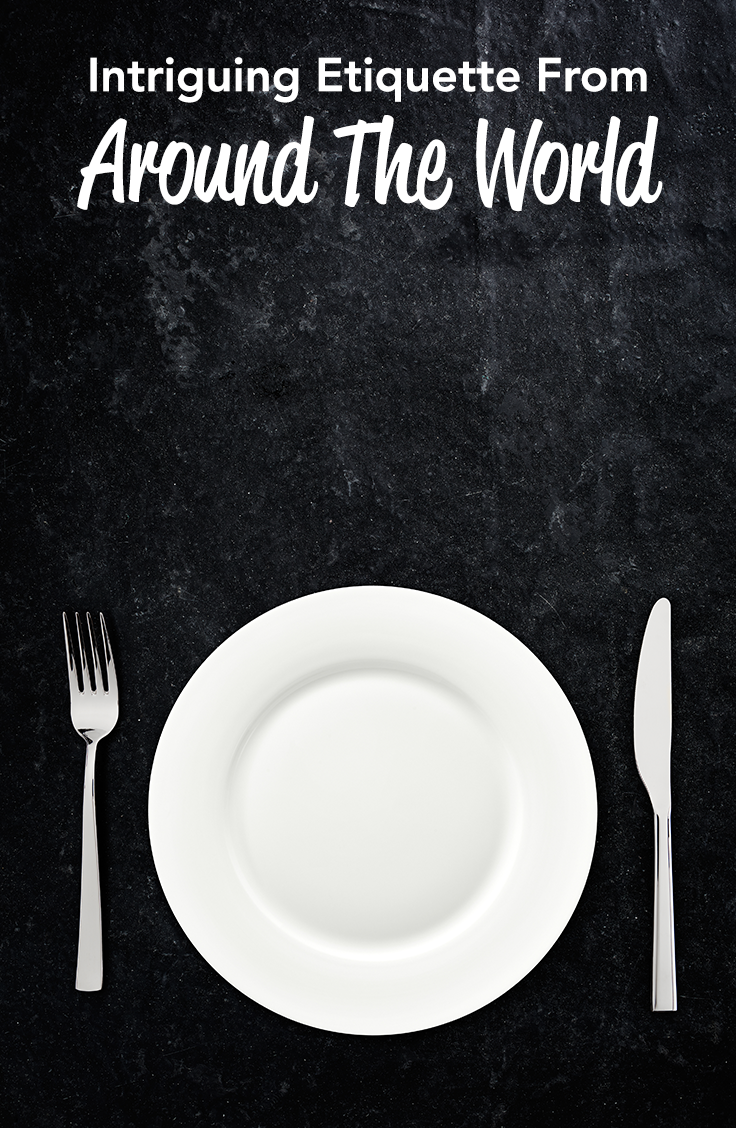