Despite being the fourth largest island nation on earth, the African island nation of Madagascar is also one of the most sparsely populated - with regards to humans. Madagascar is internationally renowned as a biodiversity hotspot, with 90% of the island’s wildlife unable to be found anywhere else on earth. More than one-fifth of the entire island is forested, accounting for an area measuring 12,553,000 hectares. Fred.\ Discover’s range of Madagascar tours can take you to the heart of this mesmerising natural island.

The Ranomafana National Park is one of the island’s many tropical rainforests – covering an area of 161 square miles. Established in 1991, the Ranomafana’s national park status has helped conserve the unique biodiversity and local ecosystem – thus reducing the impact of human pressures on the area. Unlike other rainforests, its elevation varies dramatically from 600m to 1,400m. As a result of this, several ranges of vegetation are able to exist including lowland rainforest, cloud forest, and high plateau forest.

Within the national park, it is possible to admire an impressive range of lemurs, of which there are 12 distinctive subspecies.  We take a look at each subspecies of lemur that you may be lucky enough to see for yourself whilst embarking on a tour through the Ranomafana Rainforest.

Distributed across the whole of Madagascar, the nocturnal Greater Dwarf Lemur is found in forests all over the island. During the day, they sleep in nests made of twigs, grass and leaves; or hollowed sections of trees padded with dry leaves. Their fur is grey or reddish brown and often features dark circles around the eyes.

The Greater Bamboo Lemur can weigh up to 2.5kg and has greyish brown fur with white ear tufts. Their long tails and back legs assist in leaping vertically among trees and, as the name suggests, they feed almost exclusively on bamboo. Their critically endangered status means they are found almost exclusively within the Ranomafana National Park.

The Red-Bellied Lemur is a medium-sized strepsirrhine primate with a chestnut brown coat. It is distinguishable by the patches of white skin under the eyes, which gives a teardrop effect. Discovered in 1850, the behaviour of this species has been studied extensively since the 1980’s within the Ranomafana national park.

As the name might suggest, this small primate species bears a close resemblance to a mouse and is often reddish-brown in colour. In the wild, these lemurs have one of the shortest lifespans, surviving only 6-8 years in the wild. They are able to store 35% of body weight in the form of fat, which is stored in the hind legs and tail and used for energy when food is scarce.

Characterised by a black body and light-coloured saddle towards the lower part of its back, the Milne-Edwards’ Sifaka is an endangered species or lemur. These lemurs have sharp and pointed nails – enabling them to cling to their surroundings, should they slip. They also have larger toes compared to other lemurs, which reflects stronger grasping abilities.

The Aye-aye is an endangered subspecies of lemur, known best for its rodent-like teeth and an especially thin middle finger. It is the largest nocturnal primate in the world and is best known for its unusual method of sourcing food, which involves tapping on trees to find grubs and gnawing holes in the wood to from which to pull them out.

The Red-Fronted Lemur is one of Madagascar’s more common species of lemur and can be found throughout the various lower forested areas. It has a grey coat, black face, muzzle, forehead and a black line between the muzzle and forehead. These lemurs enjoy a diverse diet consisting of leaves, seeds, fruit, nectar and flowers.

This subspecies of lemur is one of three known subspecies – all three of which can be found in the Ranomafana national park. These subspecies – ‘Gilbert’s Bamboo Lemur’ and the ‘Ranomafana Bamboo Lemur’ – were discovered more recently within Madagascar. The Eastern Lesser Bamboo lemur is grey in colour, sometimes with a red patch on its head.

Bearing a resemblance to the panda, the Black and White Ruffed Lemur is an endangered species that can be found on the island. Unlike many other lemurs, their diet depends almost entirely on fruit, in addition to flowers, seeds, nectar and leaves. They also show signs of female dominance, with aggressive interactions often won by the female.

Discovered in 1986 by American conservationist, Patricia Wright, the Golden Bamboo Lemur led to the opening of the Ranomafana National Park in 1991. It was opened in an attempt to protect this endangered lemur, of which only 1,000 individuals remain today. These lemurs measure 28-45cm long and have tails between 24-40cm long.

These nocturnal medium-sized primates have a grey, brown or reddish fur with a white/yellow coloured fur underside. They are strictly nocturnal and use their strong hind legs to take long jumps among the trees. Whilst on the ground, they tend to hop similarly to a kangaroo and will often hide in leafy covering or hollowed trees.

In addition to lemurs, Madagascar’s forested areas are home to a wealth of rare flora and fauna that you won’t find anywhere else in the world. Africa is a treasure-trove of unique wildlife and TravelQuest's range of tours can offer unparalleled opportunities to encounter a range of rare and distinctive species. If you would like to find out more, get in touch via the freephone number above or complete the online enquiry form. 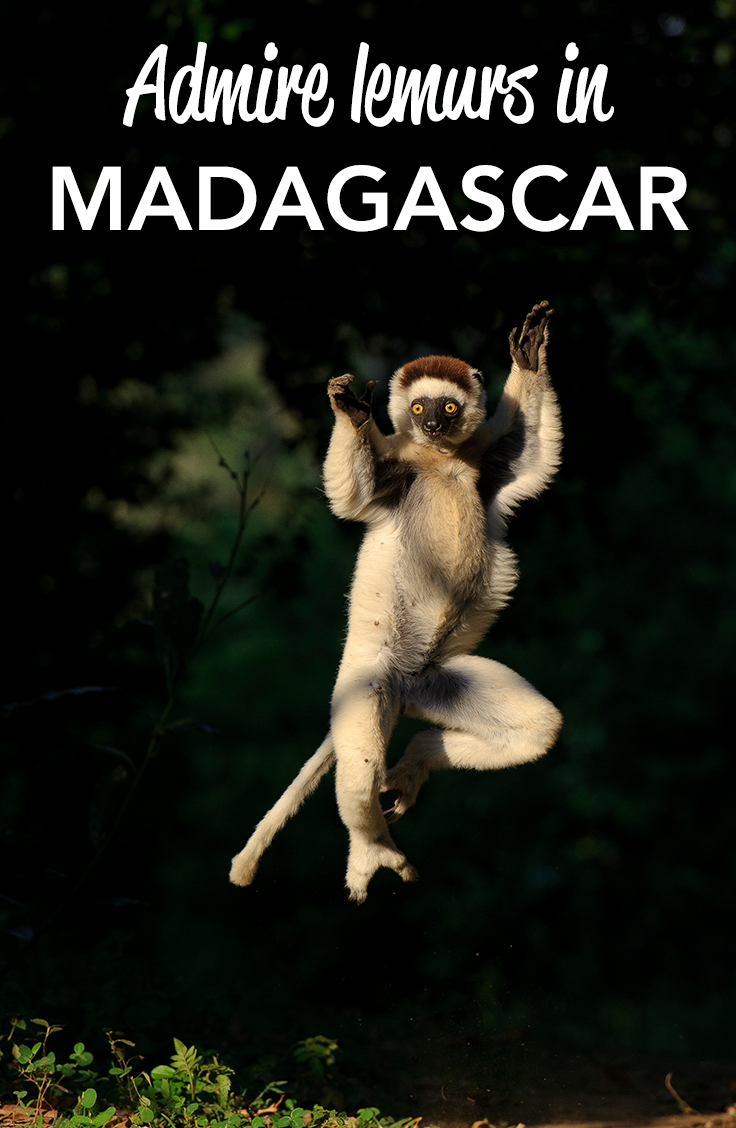