5 National Parks To Visit In Namibia

Namibia is a hub of natural beauty, whether it be wildlife living in their natural habitat or stunning desert landscapes that appear to go on forever. A holiday to Namibia is a trip like no other, with unique experiences around every corner.

Here are five different Namibian national parks we recommend you visit if you’re on the hunt for spectacular scenery and beautiful animals.

The Bwabwata National Park serves as a migration route for African elephants travelling from Angola to Botswana. You won’t want to miss this unique occurrence when herds of elephants pass through streams and land to escape a potential drought.

The name Bwabwata refers to bubbling water and encourages visitors to explore the wildlife living in the Kwando and Okavango Rivers. Take a boat trip to see hippos bathing while red lechwes hide in the reeds on the riverbanks. Listen out for the calming sound of songbirds over the rustling bushes and trickling streams.

During a tour, you’ll see many camelthorn and mongongo trees spread out across the grasslands, providing shade to smaller mammals and creating breathtaking silhouettes at sunset.

Situated in the Kalahari Desert, the Khaudum National Park is a remote nature reserve home to lions and hyenas. Three rivers, known as the Omuramba, run through this park, with dense acacia forest growing either side. Keep your eyes peeled for water lilies and acacia tortilis, umbrella-shaped trees.

From November to March, over 300 bird species inhabit the area, including the charming parrot and awe-inspiring birds prey – don’t forget to pack your binoculars. For a chance to see other wildlife, visit between June and October when the weather isn’t too hot.

The game reserve homes over 500 African bush elephants, several Angolan giraffes and different species of antelope – the Roan antelope being a favourite for visitors.

Namibia’s largest wetland area is the Nkasa Rupara National Park, home to swamps, lakes and rivers. These damp conditions are ideal for particular plants and animals like hippos and crocodiles.

We recommend visiting in the dry season, between May and October, to increase your chances of seeing any wildlife. During this time, you can drive a 4x4 down designated trails while looking out for antelope by the water and colourful birds flying ahead.

This park is one of the few places in Namibia where buffalo and elephants are spotted regularly. Follow their footsteps to discover their final destination – you may see other animals along the way.

The Skeleton Coast stretches 500 kilometres across the northern edge of Namibia, its name derived from the numerous whale skeletons found on its beaches. When wandering down the large stretches of sand, keep an eye out for wrecks of ships said to have crashed here after fighting with the strong current and high waves.

Visitors are drawn to this area to see its vast wildlife and unique plants, including lithops, known as living stones because they resemble large stones. The elephants and lions living here have adapted to a desert-like habitat, differentiating themselves from others in different parks. You can also spot seals on the beaches, as well as zebras and jackals further inland.

Situated in the north of Namibia, the breathtaking Waterberg Plateau Park is home to a 50-kilometre-long table mountain. Its brick-red sandstone contrasts beautifully with the surrounding lush, green flora, creating a picture-perfect setting. During a hike along this ridge, you’ll have spectacular views of the vegetation and animals below.

Many of Namibia’s endangered species were transported to Waterberg Plateau to be protected from predators and introduced to breeding programs. The eland, white rhino and Cape buffalo were all endangered animals put here to be protected and can still be seen today.

The types of birds seen here differ from the other national parks. Rather than small songbirds, you may catch a glimpse of peregrine falcons and black eagles sawing high in the sky.

If any of these national parks have inspired you to book a trip to Namibia, contact us via our website or call us on 0800 021 3237 to find out more information of what we can offer you. Alternatively, you can visit our Ipswich, Framlingham and Woodbridge travel agents to speak to a member of our team. 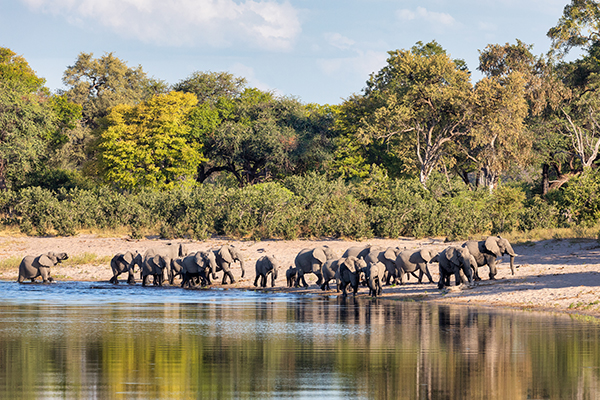 Experience the Scenery and Wildlife of Namibia

Namibia is home to some of Africa’s most impressive landmarks and provides a home for a range of wildlife – all of which can be seen on a TravelQuest tour.
Read more...
Bonded by the Association of British Travel Agents (ABTA) and by the Civil Aviation Authority's Air Travel Organisers Licensing (ATOL) scheme, you can look forward to your next adventure with the peace of mind that your money is financially protected in the event of unforeseen circumstances.